The Afterglow team was greeted with surprise, sincere gratefulness and many hugs from Cindy and John Savage and their three children. Watch the surprise here.

“The furnace giveaway has become a tradition for us at Afterglow and we are so happy to give back,” said the General Manager of Afterglow Stephen McDonald.

The Savage family welcomed the Afterglow team into their Kitchener home this morning (Saturday December 19th). They are the winners of Afterglow’s fourth annual Furnace Giveaway. 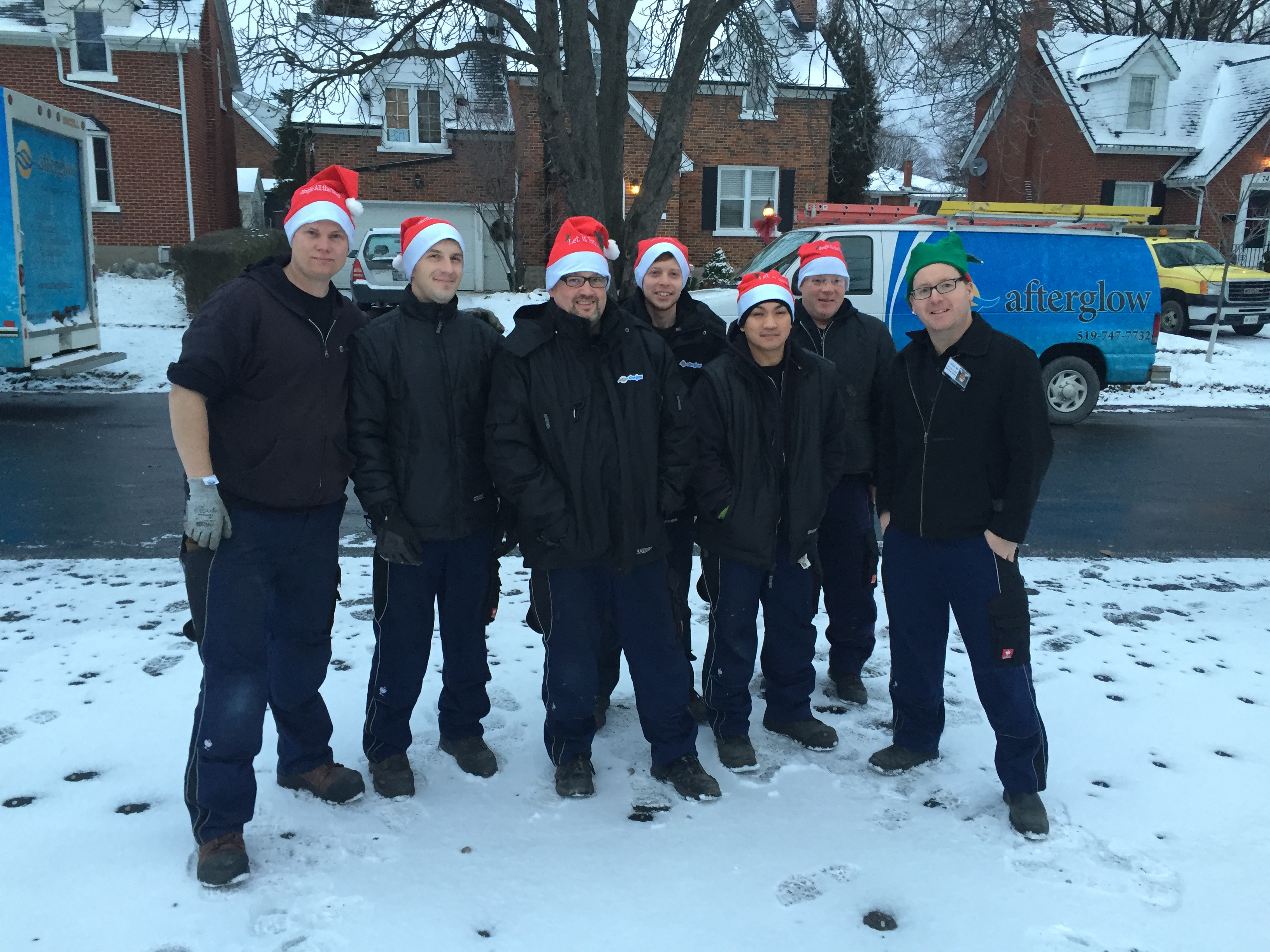 “I am surprised. Relieved more than anything. I knew that our current furnace was near the end of its life and figuring out how to save up for a new one would be difficult,” explained Cindy. “Now that concern is just gone. This is the best gift ever.”

Cindy and John have been married for 12 years and are the parents to three children, a 10, 8 and 14 month old. John is unable to work due to health reasons, so Cindy works to support her family. Their current furnace is 20+ years old and has not been working properly. Cindy’s mom nominated her because she wanted to give her daughter’s family the gift of warmth this winter.

Hardworking mom Cindy greeted us at the door of her home with thank yous and tears, “this is the nicest Christmas present we could ever get. Thank you so much.”

Cindy and her family will not be left without heat this Christmas. The Afterglow team installed a brand new high efficiency furnace and a new thermostat within hours. 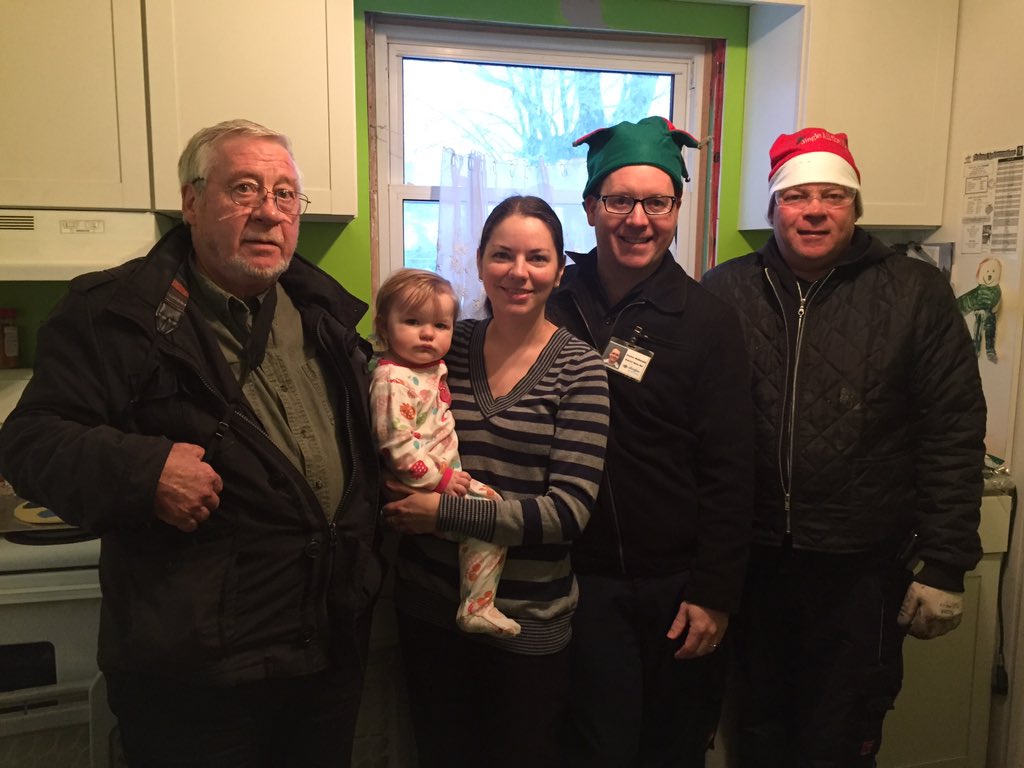 To make this giveaway possible, the Afterglow team had many supporters. The high efficiency RHEEM furnace was donated with support from Noble Trade and the sheet metal was donated by BMC Sheet metal. The Afterglow team is thankful for all its partners. The estimated cost of this “gift of warmth” is over $5,000.

Stephen McDonald said, “thanks to everyone that nominated families and to the judging panel that made a very difficult decision. We are so happy that we could help the Savage’s stay warm this winter and for many more winters to come.”

Have a warm and merry Christmas!

Remembrance Day is around the corner, and we are proudly wearing our poppies at Afterglow. While the 11th falls on a weekday this year, we hope you take a moment to remember, even if you can’t make it to the ceremonies.

War is a hard subject to teach kids. It’s even a hard subject for adults to understand. War feels like something that happens in far away places and doesn’t affect us personally. Yet, with the recent tragedies in Ottawa, we see how scary and close to home violence can be.

Wearing a poppy is a tradition which dates back to World War I, and was inspired by the famous poem, “In Flanders Fields” written by Guelph’s John McRae. This year marks the 100th anniversary of the start of World War I which changed the world forever. Canadian forces continue to be active in conflict zones around the world.

We have so much to be thankful for living in Canada. So thanks to all the soldiers past, present and future. May we never forget.

Waterloo — Royal Canadian Legion branch 530: parade leaves the Regina Street hall at 10 a.m., and marches to the Waterloo cenotaph for a 10:15 a.m. ceremony. The parade, which will include members of the Royal Highland Fusiliers, a military band and vehicles, and soldiers in Second World War-era uniforms, will proceed along King and Princess streets.

Kitchener — Royal Canadian Legion, Fred Gies branch 50: a ceremony will be held at the Kitchener cenotaph, at the corner of Frederick and Duke streets downtown, beginning at 10:30 a.m. Area streets will be closed for the duration of the ceremony. A special Remembrance Day ceremony will be held at Veterans’ Green, a commemorative parkette at the corner of Spadina Road East and Glen Road at 3:30 p.m.

Cambridge (Galt) — Royal Canadian Legion branch 121: parade march will begin at 9:40 a.m. at the legion hall on 4 Veteran’s Way and will continue on to the Galt cenotaph. Wreath laying ceremonies will follow.

Why You Should Buy A Furnace From Afterglow

Did you know the average life expectancy of furnaces in the home is 16-20 years? If your furnace is close to this age or older, you should begin shopping.

Afterglow technicians are trained and have experience with nearly every make and model of residential furnaces in Waterloo and Kitchener. But that’s not the only reason why you should purchase a furnace from us! Provided below are the top 6 reasons:

Call one of our experts today to talk about what solutions are right for your home. No question is too small, or too big! Furnaces are a big investment and we want to make sure you are happy with your choice.

Afterglow protects your house and doesn’t leave a mess! We want to improve your home with the best system, and part of that is making sure installation isn’t too messy and intrusive. Our team of professionals work quietly and neatly, ensuring that they only leave behind high quality work! Don’t believe us? Watch this video.

We only hire the best, most professional installers. Afterglow will ensure that your new system is safely connected and working perfectly, so you don’t have to worry.

From beginning to end, we ensure our systems are the highest quality and in excellent working order. We make sure that everything works properly, and is correctly and safely installed, so that you can just relax and enjoy the comfort of your improved home surroundings.

Did you know that Afterglow offers the industry’s BEST warranty? We warrant everything we install for 10 years. Yep, ten years. All you have to do is get it serviced by us once a year.

When we install your new heating system, our job isn’t finished! We want your investment to last a LONG time, so we offer follow up service. It provides maintenance, cleaning, and system checks, along with great advice on how to keep your system working efficiently! We also offer protection plans for added peace of mind.

Afterglow is installing a new Canadian-made boiler on Ontario Street in Kitchener. Have you been to Ontario Street lately? It’s a cool place with all kinds of fun and unusual stores and restaurants.

Downtown Kitchener is really coming into its own!

We’re installing in the building with the trendy clothing consignment store, StylFrugal and Little Mushroom catering. StylFrugal has some great style tips for women and unique services such as the nail polish exchange. Little Mushroom has been catering a lot of local businesses and their menu sure is delicious!

There is cool stuff all around there: artist James Nye’s studio. His paintings of urban landscapes change the way we see beauty in our cities. There is also the board game cafe Adventurer’s Guild where you and your friends can play, challenge other players, and nosh while battling it out in one of your favourite games!

If you haven’t been downtown lately, check it out! These are local shops run by locals from our community. We love supporting our local businesses and love how they contribute to the cultural life of Kitchener-Waterloo. And check out Afterglow, another local community business happy to make life in Kitchener healthy, happy and fun.

The History Behind Afterglow

What’s in a name? When we first started out in 1991, we were called Delta De-Liming. We focused mostly on mechanical problems with water heaters. As our business grew, we adapted and evolved into the full service providers we are today. We wanted to find a name that reflected what we did and our connection to the community in which we work.

Fun fact, The City of Kitchener also went through a re-naming in 1916! Before then, the city was named Berlin, reflecting the German culture of the early settlers. Great Britain and Germany were allies during the 19 century; after all, Queen Victoria was married to a German Prince! But all that changed in 1914 when Great Britain and Canada went to war with Germany.

City officials and business owners were concerned with all the products being manufactured and stamped with “Made in Berlin.” A lot of local manufacturers, such as the Lang, Eagle, and Breithaupht Tanneries were producing much needed military supplies. A referendum was called to change the city name.

Some of the names on the ballot were Brock, Corona, Adanac (Canada spelled backwards), Keowana, and Benton. However, the Secretary of State for War, Lord Kitchener, went down in a shipwreck only a few months before the September vote, so the city chose to honour him by choosing his name.

In 2007, we changed our name from Delta to Afterglow. Some of the other names we considered were Lamplighter, Acapella, and Vitruvia. We liked Afterglow the best for numerous reasons, but mostly because after we have finished servicing or installing your furnace or boiler, we know you will feel good!

After all, there’s a lot to be said for a good name!